Carrots And Sticks: Why Singapore Malay-Muslims Can And Must Bridge The PSLE Math Gap 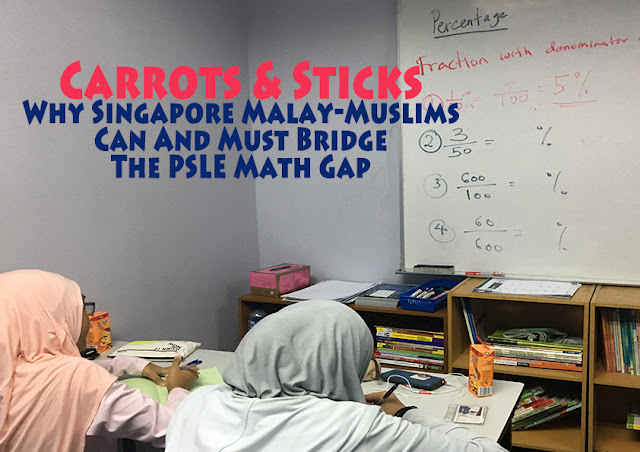 I sincerely believe that if the Malay-Muslim community of Singapore put their hearts and minds to the task of bridging the PSLE Math gap, we can do so within 5 years. This gap has existed since the PSLE began in 1960. We improved in our scores until about the mid 1990s, and then for some mysterious reason, we stagnated at the plateau of producing a pass rate of about 60% at Standard Math. For the last 20 years, we have not shown any improvement. As a Malay-Muslim in Singapore, an educator and a tutor who has helped many weak students excel in Math, I cannot accept the PSLE Math gap; it is ridiculous. I do not blame anyone outside the Malay-Muslim community of Singapore for our state of affairs. It is the fault of our Malay-Muslim community.

The following is a list of reasons, some carrots and some sticks, why we Malay/Muslims must pull up our socks immediately. It is also a message of hope that we can solve this problem within a few years.


Singapore students have so scored well in international studies from the mid-1990s that it has been categorised as the top country for Mathematics or one of the top-scoring countries for Mathematics. Since our Malay-Muslim students’ scores are way below the national average, we can therefore infer that our international Math score would have been significantly higher if our community’s scores were not included, Singapore would probably have fared better. The point? Don’t pull Singapore Math downlah. Malulah.

Reason 2: Don’t Kacau (Disturb) Singapore Exports
Singapore has exported its Primary Mathematics programme overseas. In USA alone, some say that more than 2000 schools have adopted Singapore Math. This is more than 10 times the number of primary schools in Singapore! How is it possible that on one hand we are so good in Math as a nation that we are exporting our Math overseas, and at the same time, our community is trailing far behind the national average.

Reason 3: 20 years have passed!
In the mid-1990s, about 60% of the Malay-Muslim cohort passed PSLE Standard Math. As of 2016, the percentage of passers is still stagnant. What have we been doing these 20 years? 20 years is not a short time. Are we even discussing the problem and finding solutions? Or have accepted it as a reality that failing Math is our fate as a community?

Reason 4: There are thousands of Malay-Muslims working in the education industry
There are so many teachers in the Malay-Muslim community. If we draw our family trees, I am certain that most Malay-Muslim families will have teachers listed; they may be our siblings, cousins, aunts or distant relatives. The point? How can it be that we have thousands of teachers in our community, and we still cannot solve this problem? Maybe we are not trying hard enough.

Reason 5: How much more must our government do for us?
When I started teaching at a primary school, I was really interested in a programme that is still run today – the Learning Support Programme (LSP). As highlighted by our government, it has been highly successful. When I walked past the Learning Support Coordinator’s room, I could help but estimate the number of Malay-Muslims involved in the programme. Although we are only about 15% of the population, we are an over-represented clientele in the LSP. It seemed at that time, and I have no problem believing it today, that perhaps 40% to 60% of the students were Malay-Muslims. Hasn’t the government done enough for us? The LSP was conceptualised and managed to help weak learners in lower primary Math, and we Malay-Muslims are the community with the largest number of weak students attending the LSP.  Yet we are still over-represented in the number of failures at Standard Math in the PSLE. What is our excuse for not excelling in Math after the government has spent millions to help us?

My brothers and sisters, the government has done enough to help us. We must help ourselves. We can’t go on like this. We can’t just leave this issue to the Malay-Muslim leaders and forget about it. They need help, whether they admit it or not.

Reason 6: Intelligent Malay-Muslim Leadership
The Singapore government appoints very smart people to leadership positions. In fact, if you were to count the number of Degrees, Master Degrees and PhDs among the Malay-Muslim leadership, I am not surprised that today, the Malay-Muslim leaders can be said to be the most academically qualified when compared their their previous counterparts. This simply means that perhaps we have the best minds to solve our community’s problems. So, where is the master plan for solving the PSLE Math problem?

Being intelligent is not enough to solve this problem. I worry about 2 things about the Malay-Muslim leaders. Firstly, I worry they are not even discussing this issue and producing real solutions. If they are, where is the masterplan? Our government produces masterplans when they intend to introduce key changes and improvement. Where is our masterplan? Secondly, worse still, I worry that they may believe there is no way out of this problem. I fear that this is why we are no longer hearing this issue being discussed. I know many attempts have been made to close the PSLE Math gap. However, these attempts were arrows shot in the dark, neither addressing the root causes of the problem nor carrying the antidote to rid ourselves of this disease.

It is because of these 2 worries that I am coming out into the open and saying openly – please discuss the PSLE Math gap and prioritise solving it because solutions do exist. It won’t take us another 20 years. 5 years will do. I am sure about it, if we get our act together.

Reason 7: Resources and money are not a problem
Some people have said that Singapore ranks among the world’s richest countries. I have no problem believing this. Is money really a problem for social organisations here? I doubt so. I am sure we have lots of savings in Mendaki, the mosques, and many other Malay-Muslim entities. In fact, if we are serious enough, the whole nation (not only Malay-Muslims) will contribute to this cause.

Reason 8: Let’s break the psychological barrier
The stigma of the unintelligent Malay has been around since colonial times. Although I think it is a load of rubbish, I cannot help but accept the reality that there are members of the Malay-Muslim community who actually believe that the Malay-Muslim community cannot excel at Math. I have taught Chinese, Indian and Malay students who are weak in Math. I see no differences between them at all.

Take a different perspective. Imagine for a moment that the Malay-Muslim community can bridge the PSLE Math gap. Can you imagine what would happen? I believe a new spirit of confidence will be breathed into us and this phenomenon will cause world champions to emerge from our midst. I am dreaming of course. But you never know how great and positive the effect will be. Break this glass ceiling and I am sure some of us will soar the skies.

Reason 9: An exciting new vision for the Malay-Muslims of Singapore
It is not only the Malay-Muslim community of Singapore that is weak in Math. Many other countries, like those in North and South America and even many of our Southeast Asian neighbours, suffer from poor Math scores. Can you imagine the potential we would have as a community if we successfully pull ourselves out of this diseased state? Do you know that we can lead millions of people from all over the world out from their diseased state too?

We should see the PSLE Math gap as an opportunity. See it as our passport to play an active and leading role in the world around us. Whether we share the solutions to our problem (when we do solve it) with the world free or as a business, know that there are many out there who are awaiting solutions, waiting for people to help them. I have spent the last few years training teachers in the region and I testify that Singaporean teachers have a role to play in the region, if they choose to see a bigger role for themselves.

Reason 10: The Solution Is Already Here!
Our challenge is not finding the antidote to our disease. As I explained earlier, (please see my article here), the solution is already here. And you do not need to hear it from me. I have even told you how to find the antidote and I inferred that oversight is the reason why the Malay-Muslim organisations could not find the antidote. For me, the solution is clear, and we need only 5 years to solve this problem.

There you have it – 10 reasons why we can and must bridge the PSLE Math gap. As I write this article, I wonder whether I am the only one who believes that it is that easy to solve this problem? Anyway, I will leave this article in cyberspace  and hope it will bring some good to our nation.
Posted by Shaheed Salim at 05:51